Translations of this page:
You are here: start » list2 » candidate_for_the_goddess

The Candidate for Goddess : 女神候補生 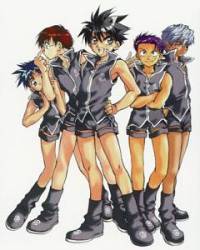 It is the year 4088. It has been over one thousand years since the Crisis of Systems (Lost Property), which resulted in the destruction of four planetary systems, leaving only a single inhabitable planet, Zion. Mankind is forced to live in space colonies, since that one planet is constantly being invaded by alien life forms that have come to be known as Victim. To stop the aliens and to allow people to land on Zion, mankind has developed the astronomical humanoid weapons, Ingrids, also known as Goddesses. At the G.O.A. (Goddess Operation Academy) young men to pilot are trained to pilot the Ingrids.