Translations of this page:
You are here: start » list2 » crest_of_the_stars

Crest of the Stars : 星界の紋章 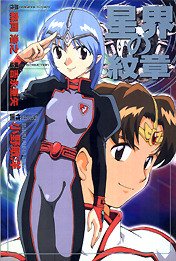 Jinto Lin's homeplanet Martine was suddenly taken over by the Abh Empire when he was ten years old and by a treaty his father was appointed leader of Martine and given an Abh nobel status. Now seven years of studying the Abh language, as a count, Jinto is finally to meet the Abh for the first time and be taken to their capitol, Lakfakale, for his training as a military officer. Though on the way there they are attacked by the United Mankind. An attack that triggers a long, long war with Jinto and his new-found friend Lafiel deeply entangled.